On Good Books and Difficult Translations

"We're Going on a Bear Hunt" by Michael Rosen and Helen Oxenbury is on of my favourite books for the babelkids. (I might have mentioned it before.) All three of them like it and BK3 (now 2.5yo) wants to see and hear it pretty much every night currently. 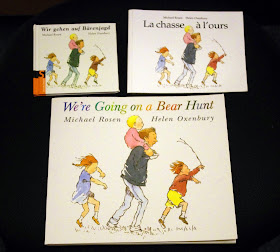 We managed to get three versions of the book: English, French and German.

Now I fully get that translating is a difficult job. Especially for a book that comes with a rythm and all.


(Btw: BK3 has seen this video a couple of times a lot and demands that I do the same routine.)

So how do the French and German version fare? Honestly: sub-par.

The French translation tries to stay close to the text. That works in a sense, because if you know the original, you can read from the French version in English, i.e. translate on the fly. I'm sorry, but the French just doesn't work.

The German version, though, is absolutely abysmal. The translation is trying to stay closer to the pattern, but it does so in a stupidly funny way that I think really doesn't do the book any justice. At all. As in: do NOT buy that.

Yes, I do understand that translating is difficult. Maybe for some really good books it just shouldn't be done at all.