BabelDad was surprised to learn I watched Sesame Street when I was a child, in Arabic. I am sure every 30-something Algerian can still hum along the opening score of  "إفتح يا سمسم " (Open Sesame). 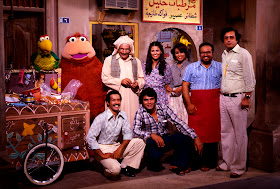 Ernie and Bert were of course Anis and Badr. Same stories, but in Classical Arabic.
Even though the girls are familiar with the German version, SesamStraße, they were not that impressed by the Arabic one.

Remember when you were a child, looking up a word in the dictionary, only to realise 10 minutes later you had forgotten what you were looking for? Same thing happens to me on Youtube. The memories flooded in.

While looking up episodes of Sesame Street, I stumbled upon
سنان (Sinan). It follows the adventures of Sinan, a  beaver who is well-endowed in the teeth department, and his animal friends, in the green forest. 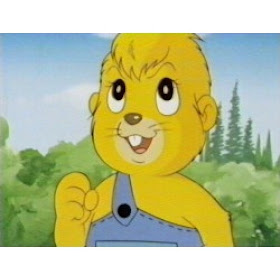 This on the other hand caught the girls' attention big time. They have been snuggling on the sofa for the last two hours, watching episodes of Sinan on the ipad, in classical Arabic. BK1 says she understands a bit, while BK2 does not understand much. BK3 is just mesmerized by the screen, as usual.

I find it bizarre to understand a language that my daughters don't. What a funny feeling. It makes me more determined to redress the balance.

This is why we are about to shell out on a satellite dish and a decoder. Not to watch the latest blockbuster or football game, but to have a preschool  TV channel, in Arabic.
BabelMum at 18:20
Share